Home News We live in a different world than we did just a few...
Facebook
Twitter
Email

The OSAA has taken steps designed to protect student athletes and fans. Some of those decisions were not popular with some, but done with the best interests of all considered.

Easternoregonsports.com is not the place for people to receive the most up to date information on Covid 19. With the recent actions of tournaments cancelled, spring sports delayed and practices called off, we really are on a temporary hiatus. But, with all the doom and gloom, consider this-we need to get back to normal.

Yes, this is a dangerous time in history and there are issues far more serious than a high school track meet to consider. However, the 1918 influenza pandemic infected 27 percent of the world’s population at the time. 500 million people were infected and of those, the death toll is estimated to have been between 17 to 50 million with some estimates going as high as 100 million people. Historians point out the strain was no different than previous strains, but malnourishment, overcrowded hospitals and poor hygiene created a “superinfection”. Consider those numbers with our recent infection.

So, what is normal?

None of us could foresee this “break in the action.” We here at easternoregonsports.com have made monumental leaps forward in the coverage of high school sports thanks to our many fans, coaches, supporters and most importantly, the photographers assisting us. Fans of the website regularly see action from teams across the region, an accomplishment we take great pride in achieving.

We ask you to stay with us during this time.

We, like many of you, grieve the games that have been called off. We now look forward to getting back to seeing our student athletes where they belong-competing. The busses need to be rolling, filled with excited athletes destined to towns miles from each other.

Much has been written about the actions of some during this time. We have seen the people purchasing enough toilet paper to TP the rival high school’s building seven times over. A minority are loading pallets of bottled water in the back of pickups, preparing for the worst. Why anyone needs hundreds of bottles of hand sanitizer is beyond us (unless you plan on making a killing by charging 70 times the retail price on Amazon-real neighborly).

All our schools have suffered in one way or another. However, consider this one school.

For years, a small group of supporters have been working diligently on building a track at Adrian High School. Holding different fundraisers throughout the year, the main fundraiser has been the Great Owyhee Off-Challenge. This 5K, 10K and half marathon leaves from downtown Adrian (yes, there is a downtown Adrian) and run up through the hills overlooking the Snake River. All proceeds from the race every year go into a fund for a school not having a useable track.

Due to our recent pandemic, this year’s race was cancelled. This will place the group’s plans behind by one year. Essentially, one future group of track athletes in Adrian will not have access to practice facilities due to Covid 19.

Easternoregonsports.com is not calling into question the actions of persons during this time. We are asking you to consider this option. If you missed a St. Patrick’s Day celebration cancelled due to the state’s guidelines, consider donating the cost of one of those tickets to the Adrian track. Instead of driving to a local big box store and fighting the crowd to purchase a case of toilet paper, buy a couple 12-packs and donate $20 to the Adrian track.

Years ago, we saw the Harper community come together to build a track. We are now seeing Adrian do the same. This is how things are accomplished in eastern Oregon.

This is eastern Oregon, not Portland. Most of us have meat in the freezer, canned goods in the pantry and are taking the recent news in stride. After seeing our family’s weekends activities called off and with no desire to head out shopping, we know one thing-we need to get back to taking pictures and writing about your kids.

And now taking the field, the Posies… 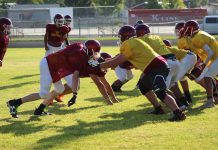 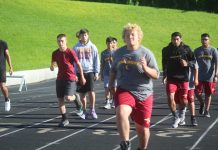