VALE – The Vale boys’ basketball team possess a perfect 4-0 Eastern Oregon League record after a 57-24 victory over Riverside on Friday, Jan. 21 on the Viking home court.

The Viks did have a slow start to the game, leading only 9-8 after the first quarter. However, in the second, Vale found their shooting, putting up 21 points and doubled the Pirate scoring, leading 30-15 at the half.

With the starters alternating off and on the bench throughout the second half, the Vikings cruised to the win.

Every single Vale player put points on the board led by Diesel Johnson’s 21 points. Johnson was the lone Vikings in double figures with the rest of the team spreading out the wealth.

For the Pirates, Diego Megana put in 6 points while Axel Gonzalez and Bennie Sanchez each added 4 points.

“Riverside was faster than we thought,” said Vale coach Colby Shira. “They really got after it. We finally settled down in the second quarter and I thought our defense was outstanding.” 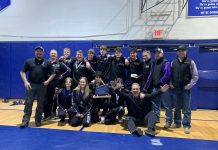