VALE – For fans of high school football, the Sept. 10 football game pitting the visiting Hawks of La Pine against the Vikings of Vale had it all. A weather delay further hyping up both teams. A field that went from dry during warmups to wet and slick by kick off. Hard hitting clean tackles. Close scores throughout the game. A late game long run that looked to give the Vikings the win. And finally, a last-ditch long pass coming up one yard short of a score for the Hawks.

La Pine was first to place points on the board. Late in the first quarter, a personal foul by the Vikings placed the Hawks deep in Vale territory. At the 2 minute, 48 second mark, La Pine’s Dylan Hankey pounded the ball in from the 5-yard line. With the extra point good, La Pine led 8-0.

Vale waited until the first play of the second quarter for their own points. On the first play from scrimmage, Viking quarterback Tanner Steele connected with John Wolfe for a 59-yard catch and run into the end zone. Also converting on the extra point, the two teams stood tied, 8-8.

On the following series, an interception by Vale’s Colton Stepleton set the Viks up on the Hawk’s 22-yard line. A holding penalty proved to be drive’s downfall and as halftime came, the score remained 8-8.

The Vikings again looked to score deep in the third quarter. At the 3:12 mark, Vale faced a 4th down with less than a yard to go to the goal line. The Hawks defense stopped the run attempt and the two teams remained locked up at 8.

Early in the fourth quarter, it was again the Steele to Wolfe connection to push Vale up 14-8. After a penalty pushed the Vikings back to the La Pine 30-yard line, Steele completed the pass to Wolfe. Using some fine running down the middle of the field, Wolfe went into the end zone.

The final minute of the game saw both teams putting up touchdowns.

Using a pounding ground game led by quarterback Colton Campbell, La Pine drove the length of the field, capping a drive off with a 1-yard dive by Dawson Cook with just 59 seconds left on the clock and a tie game.

After the ensuing kick, the Hawks defense allowed that one big score that send coaches into early retirements. With 27 seconds left in the game, Steele broke free from the backfield for the Vikings and went 88 yards to put Vale up for good, 20-14.

Campbell was not finished as he drove the Hawks down the field with just seconds left in the game. One last pass from Campbell ended up one yard short of the goal line as the clock showed zeroes.

“When you have two teams that are so evenly matched, it comes down to individual efforts,” said Vale head coach Jeff Aldred.

The quarterbacks for both teams proved to be the leading rushers. Vale’s Steele had 11 carries for 136 yards including the long TD gallop. La Pine’s Campbell rushed 19 times for 116 yards to lead the Hawks. Campbell also was 8-for-15 passing for 93 yards while Steele went 4-for-17 for 117 yards passing.

“This did not look like a week 2 game,” Aldred said. “Both teams came out ready to play after the weather delay and the whole level of play was just so high.”

Aldred said the Vikings limiting the scoring of the Hawks was a big factor in the win. 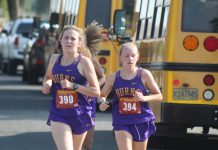 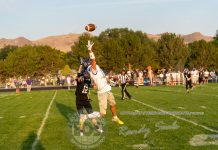 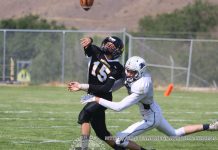