A survey released on Tuesday, Jan. 3 shows 94.7 percent of 1A schools prefer to stay playing 8-person football. The survey, sent to 95 1A schools in Oregon, received responses from 77 of the schools.

The support to remain playing 8-player football received 94.7 percent approval. Only 2.7 percent of the schools polled wished to make the switch to 9-player format.

The support remained among the 1A schools for the current 6-8-11 player model in Oregon. When questioned if the 1A schools wished to switch to a 6-9-11 model, the response was an overwhelming negative with 85.5 percent voting against the proposal. This was the same percent in favor of staying with the 6-8-11 model.

The 1A schools also showed their dislike of larger schools dictating rules effecting only the 1A teams. 80 percent of the 1A schools stated 2A-6A classification schools should not have an opinion of the decision on 8-player football.

The survey also allowed schools to make comments, positive or negative, towards the proposed switch to 9-player football.

One comment stood out, a statement from Falls City.

“To continue to play 8 man as we have at Falls City since 1960! Our administration, community and coaches identify with 8 man not 6 or 9. Our wish is to continue playing 8 man until the sun doesn’t rise or set any more!”

See the full results of the survey below. 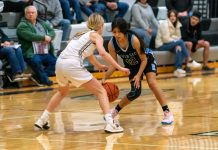