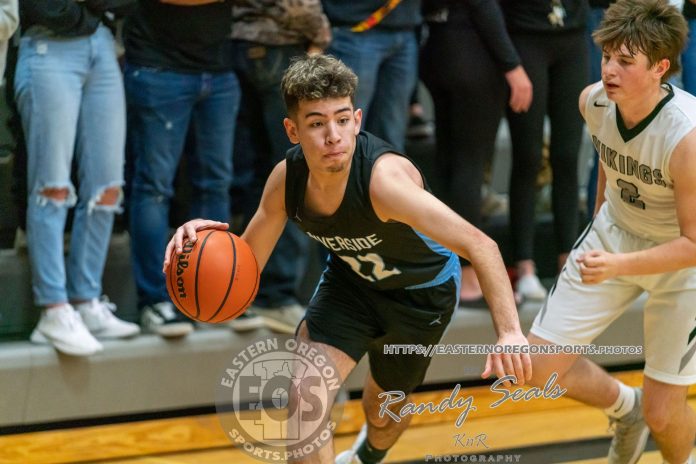 VALE – Riverside basketball coach and athletic director Clair Costello will be the busiest man in La Grande this upcoming weekend. After coaching the girls’ team to a 33-28 Eastern Oregon League victory on Tuesday night, Costello and the Pirate boys travelled to Vale on Friday and grabbed a 56-50 win over the Vikings. The two wins equate to Costello coaching two teams in the second round of the EOL district tournament in La Grande starting Friday on the campus of Eastern Oregon University.

The win saw Riverside shoot the long ball, hitting ten 3-pointers while the Vikings turned the ball over 22 times.

The Pirates took the early lead when Cristian Rea grabbed a steal and went in for the easy layup with just 18 seconds off the game clock. The Viks took their first lead of the game at the 7 minute, 32 second mark as Brayden Gregory picked up the basket after a rebound and was fouled. With less than 30 seconds off the clock, Vale led 3-2.

Vale picked up the momentum and started to pull away until the Pirates sank two long shots, cutting the lead to 10-8 with the clock showing 4:12. The two teams locked up at the 13-point mark and as the quarter came to an end, Vale led 16-15.

The Pirates grabbed back the lead at the 5:39 mark in the second quarter after a three-pointer by Humberto Sanchez and with the Vikings turning the ball over, Riverside led at the half, 27-24.

The two teams again found the same scores on the board, 31 points each, midway through the third quarter. With the Pirates again going to the outside shooting, Riverside led 37-34 with just under two minutes left in the third and led, 42-38 to start the final eight minutes.

The Vikings were able to cut the lead to two points with 50 seconds left in the game after Adam Diaz sank two free throws. Going to the press after the free throws in an attempt to regain the ball, Vale left Sanchez alone under the basket on the opposite end for an easy two points. A pair of free throws by Riverside senior John Pena secured the victory.

“We just always have to play at full speed, both on offense and defense,” said Costello. “We have little guards so we have to play fast. Our younger players stepped up tonight, especially after we started so flat.”

Costello said he was impressed with the play of Fransisco Barajas, hitting the floor after only three practices since a stress fracture sidelined the junior.

Pena and Rea led Riverside for the night, both with 13 points.

The Pirates will now meet the top seeded Nyssa Bulldogs on Friday in the district tournament.

The Vale boys end the season with a 10-14 overall record and a 4-6 league record after the loss to Riverside. For Vale coach Colby Shira, the night was about one thing.

“Turnovers,” said Shira. “Overall, I thought we played well, but the turnovers just killed us. Riverside shot really well tonight, but we kept giving them the chances.”

Looking at the season, Shira saw growth and enthusiasm for his young team.

“The young kids on this team really developed this year,” said Shira. “You need to realize we had limited leadership as there are no seniors on the team with playoff experience. We have seven players coming back next year that saw a lot of court time this year. I am excited for what I saw this year from the beginning of the season to now and what we have returning next year.”

In the loss to Riverside, Gregory had 14 points to lead Vale. Diaz finished his night with 13 points and John Wolfe scored 11 points.