NAMPA, IDAHO – With over 100 teams scheduled in attendance at one of the largest regional girls’ wrestling tournament, the Ontario Tigers finished third in the team standings at the Ardis E. Nash Memorial Tournament on Saturday, December 7. Hosted by the Idaho Homedale Trojans, the tournament was held on the campus of Northwest Nazarene University due to the number of participants.

The Tigers finished the day with 81 points behind second-place Columbia (96.5) and champion Caldwell with 154 points.

Nyssa, in the fifth position, put up 65 points. Ontario and Nyssa were separated by the host Homedale Trojans (67).

The Vale team cracked the top ten with a tenth place finish after putting up 41 points.

Nyssa’s Vanessa Ruiz placed fourth in the 130-pound class, falling in the battle for third place to Columbia’s Hallie Campbell by pin at 3:30.

Vale’s Tyler Richardson continues to terrorize opponents, taking home the championship at 143 pounds with a pin over Timberline’s Mercedes Ellison.

Two wrestlers who will see each other often this season met in the battle for third place in the 155-pound classification. In the end, Nyssa’s Noelle Acosta grabbed a 11-7 decision over Ontario’s Maria Diaz to take the third place showing.

At the 170-pound class, Ontario’s Jasmine Lopez fell by pin to Columbia’s Destiny Edgecomb and settled for a fourth place showing.

The battle at the 191 to 220-pound division featured a host of eastern Oregon wrestlers. Battling for and winning the title was Nyssa’s Abigail Osei. Osei pinned Columbia’s Emily Rhodes at the 1:41 time of the match for the title. Just prior to that match, Nyssa teammate Yvette Martinez pinned Ontario’s Naidalin Cancho for a third place showing.

At 285 pounds, Nyssa’s Aiyana Luna won all three of her matches and claimed the championship. Luna pinned all her opponents for the day. 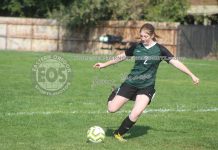