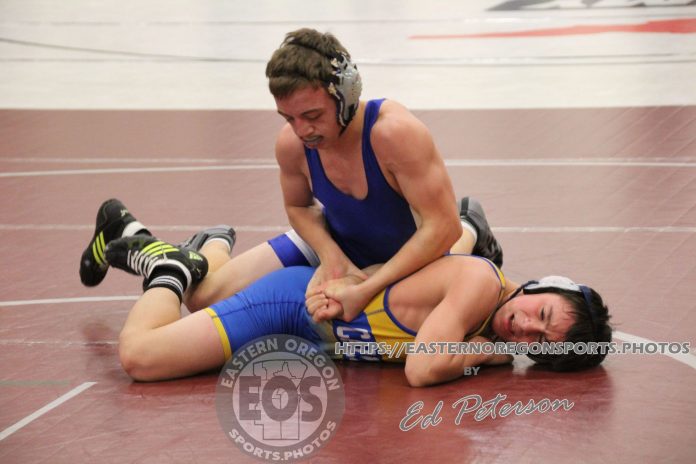 The team from American Falls made the long drive from eastern Idaho to claim the team title with 236 points. Weiser, with 203 points, placed second with the Bulldogs in third after amassing 146 points. The Vale team just placed outside the top ten, taking 11th with 69.5 points with the Adrian team just behind in 12th. Enterprise finished the day in 14th.

Cleaver, now 26-3 for the year, took a 7-1 decision over Middleton’s Kyle Austin in the 152-pound division for the title. Wrestling at 195 pounds, Simpson upped his season record to 26-1, but only having to go into extra minutes facing Emmett’s Jake Johnson. Simpson finally took the 3-1 decision. Miles pinned his opponent, Parma’s Danny Camacho at the 1 minute, 24 second mark wrestling at 285 pounds.

Enterprise also had an individual medal placement as junior Trace Evans took a technical fall win over Nampa’s Ryland Silva in the 138-pound division. Evans is now 26-1 for the season.

The Vikings of Vale returned home with two fourth place finishes as Nathan Kimball and Coy Cummings both made the medal stand.