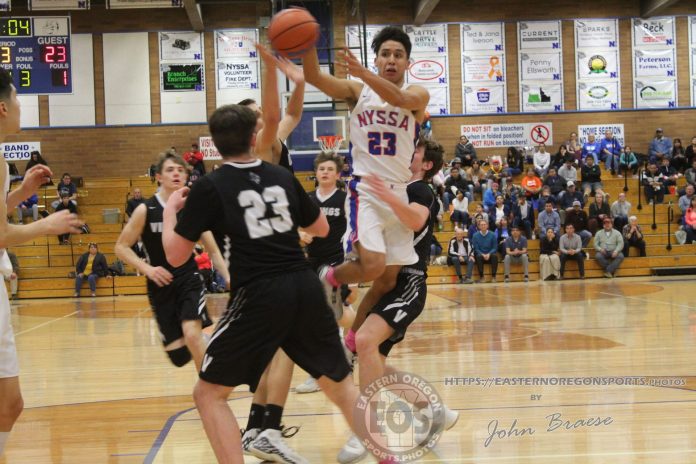 NYSSA – It has been said numerous times. When Vale and Nyssa meet on the court, the records do not matter. The standings do not count. That night is all that matters.

With the stands filled by fans of both teams, the Vale boys took the basketball court against the league leading Nyssa Bulldogs on Tuesday, February 11.

Looking for the upset, the Viks saw the first points of the game go the home Bulldogs as Leonardo Barba put the ball in for the first basket with just 35 seconds off the clock. Vale responded and at the 6 minute, 11 second mark, took the lead for the first time in the game as Colton Kesey put Vale up, 4-2.

During the first quarter, the two teams knotted up numerous times, but as the first eight minutes came to an end, Nyssa led 13-12.

The two teams continued to trade baskets coming into the conclusion of the first half. As the two teams headed to the locker room, the Bulldogs led 22-21.

Nyssa continued to wear down Vale in the second half. Leading 38-27 to start the fourth quarter, the Bulldogs took the win with a 54-39 victory.

Nyssa saw three players in the double figures, led by Barba and his 13 points. Nico Gomeza was a single point behind, tallying 12 points and Pedro Chavez finished his night with 10 points.

The Bulldogs hit 11-for-17 from the free throw line.

Vale had periods of struggle offensively. Kesey led the Vikings with 9 points. John Wolfe and Kade Kurata each had 8 points.

The win places Nyssa firmly in control of the 3A-6 Eastern Oregon League with a perfect 9-0 record and the season winding down. The Bulldogs travel to Burns (11-11- overall, 4-4 league) on Friday for a final game before post season play starts.

Vale (10-12 overall, 4-5 league) faces a must win on Saturday as the Hilanders are in town for a 5:30 p.m. game. Burns currently sits third in the league standings with the Vikings holding a fifth place showing. Umatilla splits the standings between Nyssa and Burns in second. 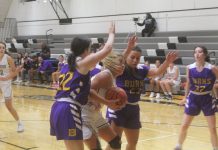