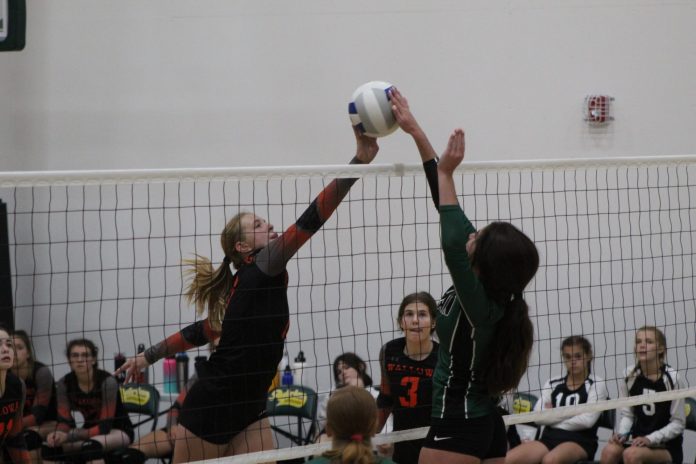 ADRIAN – The distance from Wallowa to Adrian is 183 miles, one way. The Wallowa volleyball team made the most of the roughly four hour bus trip, taking down both Jordan Valley and host Adrian in non-league action Friday.

Facing the host Antelopes, Wallowa found the points not coming as easy as the previous matchup. The Antelopes pulled out early in game one, leading 9-5 at one point. The Cougars rallied, knotting up the score at 11. The two teams continually traded points and the lead, tying up the score a total of five times late in the set before Adrian’s Stella Nichols put a kill down to give Adrian the 25-23 victory.

Game two was much the same as the first as both teams were unable to pull away early. The Cougars did lead 7-3 at one point, but the Lopes quickly closed the gap and tied up the score at 10 points. Game two ended with a Cougar win off a little drop shot by Wallowa’s Shanna Rae Tillery, one that fell between two Antelope defenders for a 25-22 win.

The Cougars led all the way in game three, jumping out to an early 8-2 margin and winning, 25-15 off an Antelope error.

Wallowa took the match in game four with a 25-16 victory.

The two victories boost Wallowa to a 12-5 overall record.