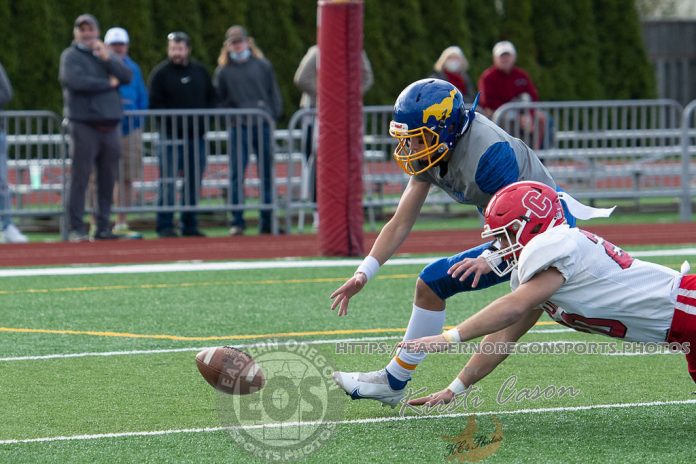 As football teams begin to take the field this upcoming fall, Oregon will play four styles of football-11 man, 8-man, 6-man and the newest, 9-man. Not played until this season and not played in surrounding states, few of us have sat in the stands watching a 9-on-9 game.

Football fans will find the 9-man field smaller than a typical field. The Oregon School Activities Association (OSAA) has decided the field to measure 80-yard-long by 40-yard-wide. Kickoffs take place from the 20-yard line instead of the usual 40-yard line.

Offensively, rules state four players line up in the backfield with the remaining five on the line of scrimmage. Offense formations can vary, but the outside linemen are typically a tight end and a wide receiver.

Defensively, teams usually line up with three linemen, three linebackers and two defensive backs. Many teams in 9-man complete the defense with a lone safety, also known as a “lurker”.

Those attending 9-man games will find few variations from 11-man. Teams will play four quarters of 12 minutes each with a typical half time intermission. Games will typically be higher scoring than 11-man games with scores frequently hitting the 70-point mark.

Teams this year playing in the new configured sport and covered by easternoregonsports.com include Grant Union, Heppner, Irrigon, Riverside, Stanfield, Umatilla and Weston-McEwen.