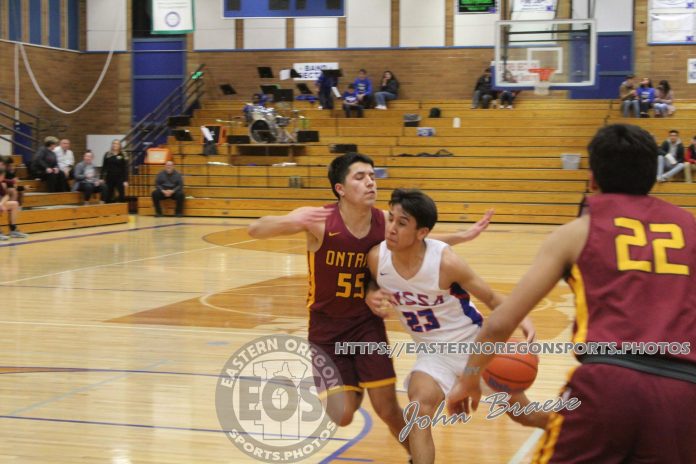 NYSSA – Although not a league matchup, the game featuring the Ontario boys’ basketball team versus Nyssa provides the winner some Malheur bragging rights. As the two teams took the floor on Wednesday, January 16, most fans expected to see a shootout. After a game that saw the Bulldogs put up 27 points in the first eight minutes of play and a total of 24 three-points baskets find the net between the two teams, the Dawgs took a 76-62 win over the Tigers.

Ontario started the game slowly, allowed Nyssa to score the first eight points of the game. Working the ball inside to Tiger junior Bradly Nielson, Ontario trailed at the end of one, 18-11. Nyssa extended the lead by way of outside shooting to 19 points, leading 43-24 at the half.

The lead remained at 19 points as the two teams headed into the final quarter as the Bulldogs led 61-42. Combining their own outside shooting with the inside play of Nielson, Ontario was able to chip away. Ultimately, the early points in the game was too large to overcome for the Tigers and the Bulldogs fans went home happy.

“I think we were a little zapped of energy after last night,” said Nyssa senior guard Pedro Chavez referring to the previous night’s nail biting 57-55 victory over Baker. “We had problems boxing out Ontario’s big man under the net.”

“We definitely played with more intensity in the first half,” said Nyssa junior guard Nico Gomeza. “We had the large lead at the half and just kind of came out in the second half with less concentration.”

Nyssa head coach Aaron Mills was happy to get out with the win and had high praise for his team’s opposition.

“I thought we had great intensity in the first half, but our defense looked tired in the second,” Mills said. “Our bench played well and Michael Marquez and Adam Fuentes came off the bench and hit some big shots. The team is trying to do what I ask of them and it shows in these games.”

Mills said Ontario is not a team to be taken lightly.

“Ontario played great tonight and Eli Morin shoots the ball really well,” said Mills of the Tigers. “Ontario is going to start beating some people. If we had not shot the ball well tonight, we lose. Ontario played harder than we did.”

Chavez had 18 points to lead Nyssa in the victory. Gomeza finished his night with 17 points and Leo Barba had 8 points.

For Ontario, Eli Morin had 17 points with 15 of those coming long range from the three-point line. Nielson also had 17 points coming from underneath the basket.