BOISE, ID – John Bates has been busy the last few months. A newlywed, Bates juggled wedding planning with the NFL Pro Day/Combine while still finding time to return to Ontario for breakfast with his grandparents at the Plaza Inn. Despite everything going on, Bates still took time to speak with easternoregonsports.com over his memories of playing as a Bulldog, his experience at the combine and his plans for the future.

Fans of the Nyssa football team will recall the memorable day the word leaked out Bates would not be finishing his high school career as a Bulldog. Due to his father receiving a new job, the Bates family was on their way down Interstate 84 to Lebanon, Oregon. The move did not deter Bates from proudly stating where he is from.

“When people ask where I grew up and where I’m from, I claim Nyssa because that is where I grew up most of my life,” said Bates. “I say I finished high school in Lebanon. Nyssa had a huge impact on my life and in making me the person I am today.”

Bates reminisces much about the home of the Bulldogs. One memory remains intact for him.

“My best memory from Nyssa was the 2013 football season where we made it to the state championship game”, he said. “The brotherhood that was established, all the hard work we put in before the season on the field and in the weight room, along with the chemistry we all had was unmatched. I learned so much from that season and had so much cutting it lose everyday with the boys!”

The coach of that 2013 team and current coach of the Nyssa football team has a slightly different favorite memory of Bates. From early on, Lee Long realized the athleticism and special talents he had when Bates took the field as a Dawg.

“With John I called the only free-safety blitz through the weak side A gap I’ve ever called in my coaching career,” said Long. “The result was John gets a safety!”

After graduating from Lebanon, Bates found himself on the blue turf at Boise State University. Playing as a Bronco, Bates continued in a role as tight end.

“My time at BSU was incredible and an experience I’ll cherish forever,” Bates commented. “I met so many life-long friends and have created so many relationships because of that place. It has great people, a great community, and a great sports fan base. BSU was a life changing experience for me.”

Like many youthful athletes, Bates had dreams of playing in the National Football League years ago while playing in the park in Nyssa. After graduating from BSU, Bates joined the very few of making the steps necessary to fulfill the dream. He declared for the upcoming NFL draft, obtained an agent and worked out before a number of NFL personnel.

“Since I was four years old, I have wanted to play in the NFL, so this has been something that has always been on my mind and something that I’ve always wanted,” he said. “With hard work and determination, I progressed each year in my football capabilities and felt that after this season I had proven that I was ready to make that jump to the next level.”

In the middle of all these life altering decisions, Bates also married Kegan Bertram on March 22 in a private ceremony. The couple’s celebration-a trip to In-N-Out.

“She’s a great supporter in everything I do and always wants the best for me,” said the newlywed Bates. “We definitely had conversations about this decision with each other along with my coaches and family. At the end of the day, we decided this would not only be the best decision for me, but for the both of us.”

Bates did not have time for a long honeymoon as the combine/pro day was March 31. 27 NFL teams were present as Bates took the field looking to impress.

“I think the combine/pro day was a very positive experience for me with all high points,” he said. “I was able to hit all the numbers I wanted and felt like I show cased my abilities at a high level. It was also very cool getting to meet with scouts and NFL personnel in person as well, just getting to shake their hands and talk with them is something you don’t take for granted.”

Bates said he would like to continue in the roll of tight end at the professional level but is open to playing any role for a chance to make it in the NFL.

“I definitely think that TE will be the main route and entry point for me going into the NFL, but if a team decides that I could fill a roll in another position and do it well to help the team win I would be up for it,” he said.

The NFL draft is set for April 29 to May 1 in Cleveland, Ohio. Bates, like hundreds of other collegiate athletes, will be waiting to hear their name called.

Bates does have plans for after the NFL as he graduated with a degree in environmental studies.

“Hopefully, I can do something after football that keeps me active and outside,” he said.

If the future involves an NFL stadium or studying greenhouse gases or both, Bates remains committed to keeping Nyssa on his radar.

“I still do talk to quite a few people from Nyssa” said Bates. “A couple of my best friends that I grew up with are from there and people that I talk to on a very regular basis. I also stay in touch with Coach Long as well!” 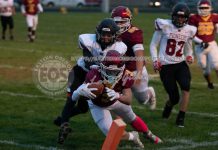 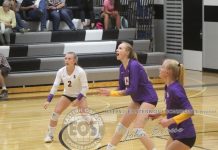 Results for Tuesday, May 25