“The board has directed the administration and athletic department to move that direction and gather information,” said Adrian Superintendent Kevin Purnell in an emailed response to a question regarding a move to Idaho.

The proposed move comes after Adrian has faced a number of challenges in the past year. The Oregon School Activities Association voted earlier this year to not grant an exemption to a football cooperative between Adrian and Jordan Valley. Last season, the cooperative grabbed a state title in Hermiston as the 1A football champions. An increase in student numbers this season pushed the combined Antelope/Mustang team into the 2A ranks. Playing this year as a combined team in the pandemic forced short season, Adrian/Jordan Valley is listed as an independent 2A team.

On Sept. 17, the Adrian School Board filed a lawsuit against the Oregon Health Authority and Oregon Department of Education demanding the district be able to allow students back into the classroom. The lawsuit followed an earlier protest by students and community members in December of 2020 demanding a return to classroom instruction.

The district sits on the banks of the Snake River with a bridge separating Oregon and Idaho. Sitting in the stands for a football game, fans can look into Idaho.

The last move of a school from Oregon into an adjoining state came in June 2017 as the Hermiston Bulldogs moved to the Mid-Columbia Conference of Washington. The reasoning behind this switch was travel as Hermiston opponents in Oregon were over 200 miles away.

“We really don’t have any guidelines on if a team requests a move to another state,” said Peter Weber, executive director of the OSAA. “We would provide whatever the other state requires.”

Weber said he was aware of Adrian’s interest in possibly departing the Oregon system.

“Adrian would need to get approval from the conference they are leaving, the conference they want to move to and the OSAA,” said Ty Jones, executive director of the Idaho High School Activities Association. “Once/if everyone approves their request, then our board would look at it.”

The earliest a move to Idaho could be made would be August. Jones and the Idaho Association next meet again in June at which time the Adrian move could be discussed. A second reading is needed before a vote is taken with Idaho not meeting again until August.

If a move to Idaho is completed, the Antelopes would most likely play in the 1AD1 division with opponents like Greenleaf Friends Academy, Liberty Charter, Notus and Wilder. 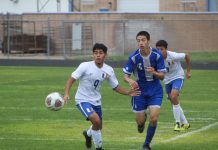