As the discussion evolves over the Ad Hoc Football Committee of the Oregon School Activities Association consideration of changing to 9-man football, easternoregonsports.com decided to look at data supplied from the National Federation of State High School Associations.

Due to the COVID-19 crisis, the national body has not conducted participation surveys in recent years. The following information is derived from the 2018-19 survey.

11-player football is played in 14,247 schools by males nationwide. The distinction needs to be made as 1,918 schools field 11-player girls’ teams. Total participation for the boys totaled 1,006,013.

8-player football is played in 946 schools and total 20,954 players with an additional 49 teams playing a girls’ league.

For the time period discussed, five states participate in 9-player football. The game is popular in Minnesota where 76 teams take the field with a total of 1,826 players. In North Dakota, 69 teams play while South Dakota has 97 nine-man teams. Ohio has a limited amount of 174 total players and Vermont has one team.

Although not as common in football as other sports, Oregon teams do schedule non-league opponents in other states playing 8-player football. In the recently completed season, Myrtle Point jumped down to California to take on Redding Christian. Gold Beach opened their season versus Butte Valley, a California squad.

Neighboring states of Idaho, California and Washington currently have no discussions scheduled for a change to 9-player football. 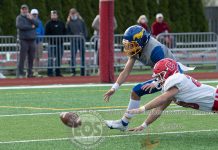 Much More Than A Game