LA GRANDE – Teams in the Eastern Oregon League get to know each other well throughout the season. A home game, a road game mark the league season with the players and coaches knowing most all about their opposition.

This season, the Burns girls lost on their home court to Vale, 32-26. The Hilanders again played the Vikings, this time in Vale and again fell, 29-35.

Burns entered the district tournament with two league losses, both to Vale. Basketball fans knew these two teams would meet in the finals.

The Vikings and Hilanders know each other. The two teams played against the other in summer league, as junior varsity players and as middle school players.

The game was close. The largest lead was held by Vale at one point, a mere five points. With 16 seconds left in the game, Vale’s Sierra Cleaver’s shot hit the rim and was rebounded by the Hilander’s Allie Hueckman. The co-player of the year for the EOL then went from one rim to the other, coast to coast for the winning basket.

Down two, Vale called the time out to figure out the play.

“We debated whether to foul or not to shrink the clock to under four seconds,” said Burns coach Brandon McMullen. “We felt we didn’t want to chance fouling a shooter by accident and picking up an intentional foul call. Our strategy was to dog the lead ball handler up the floor to chew up the clock and deny their two best scorers an open look.”

Good strategy. A Vale jumper from the perimeter could not find the basket and Burns was crowned the tournament champion after a 34-32 victory.

“We had standout performances from a number of girls over the weekend not only from our starters but our rotation players as well,” Mc Mullen said. “Kaden Raif showed a tremendous amount of growth this tournament. She has really developed a command of the offense and her defense helps set the tone for us on the other end of the floor.”

Raif led the Hilanders with 11 points. Kaitlyn Wright had 9 points, all of them threes. Hueckman finished with 5 points, the last two the most important.

For Vale, Emersyn Johnson and Kailey McGourtey each finished with 9 points. Matyson Siddoway put in 7 points for Vale.

“This was a fun game,” said McMullen. “We have had some good battles with Vale over the years and this was certainly one of them. This is two good teams!”

The win translates to Burns opening the state tournament with a home game versus Santiam Christian on Friday starting at 5 p.m.

The Vikings loss means a road game for Vale. The Viks are on the road to Oregon Episcopal on Friday for a 6 p.m. matchup. 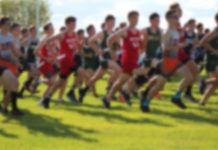 Schedule for Friday, May 21